during the decomposition of waste is a potent contributor to the global green house affect and also pose significant health and safety risks. Thus must be treated and due to it’s often rich in methane content represent a potential energy source which can be used to produce energy.

The main division in the types of flare on the market is between open and enclosed flares. The original landfill gas flares were of the open design. However, European legislation, in reducing green house affect calls for high combustion temperatures and specific residence times, has developed the market for enclosed flares. In addition, the two basic categories can be further divided according to the way in which air is mixed with the landfill gas.

The original landfill gas flares were of the open design. Open flares are also known as elevated flares.

Open flares burn landfill gas as open flames, though a windshield is normally fitted. Combustion is rudimentary and with no control over the range of temperature or degree of combustion which occurs. Due E.U. legislation pushing for higher & higher environmental standards these has become less popular these days but still are been used to same cases owing to their simplicity and lower cost.

The technology of a landfill gas flare is conceptually very simple: landfill gas is brought into contact with a supply of air and ignited. A variety of configurations of conduits and chambers can be used for the purpose. Whatever the exact design of the flare, however, it will comprise a number of basic elements, in addition to piping, valves and the body of the flare.

The basic elements common to open and enclosed flares are:

• gas cleaning/conditioning before the flare to remove moisture

and airborne debris, from within the landfill gas;

• a blower or booster developing the head of pressure needed

to feed landfill gas to the flare; 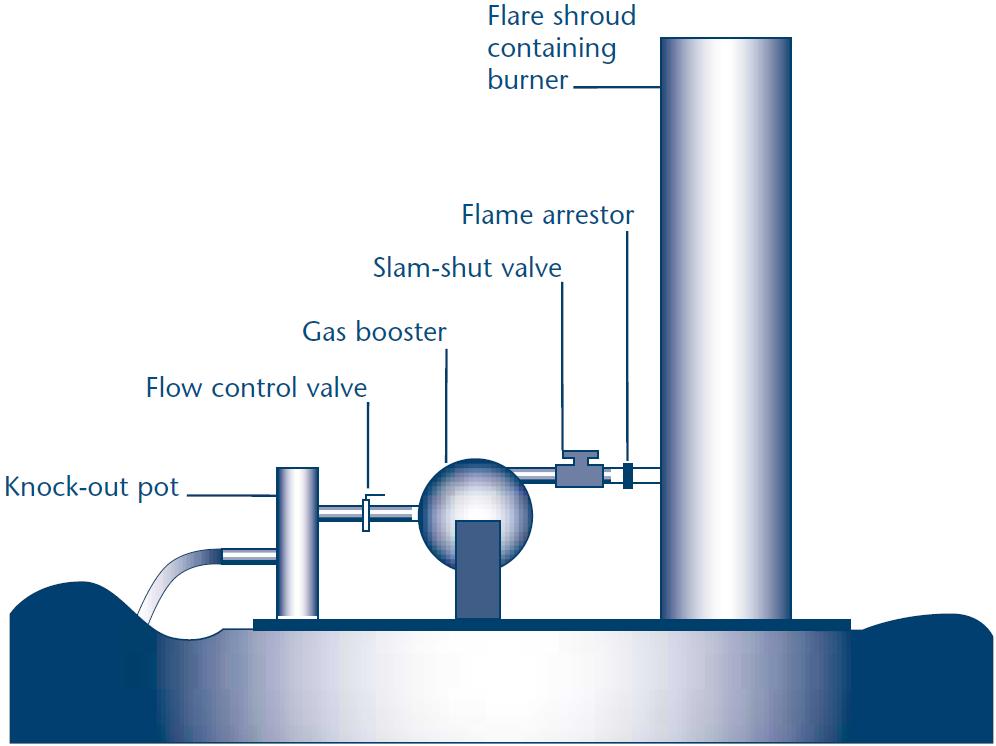 • one or more flame arrestors in the feed line to prevent

flash-back of the flame down the pipe;

• some method of control over the flow rate to the burner, and

possibly over the supply of combustion air;

• an ignition system to light the gas mixture on start-up;

• a burner designed such that it maintains turbulent mixing of air

without blowing off the flame;

• a flame detector to check that ignition has been successful and

combustion is taking place – this facility is normally provided

the location of the flame can be highly unstable.